In general, Asian people are very kind, but to us the people of Sri Lanka are the champions when it comes to kindness. And we would like to share some of our stories with you.

In 2016, we returned from a steep walk up to and down from the Dambulla Cave temple. Down on the main road again, we could not find a bus stop, so we asked a police officer where the bus stopped. He said “right here” and pointed to the place where we stood. A small conundrum to us but it was quickly solved. After 10 minutes, a bus to Kandy appeared. The police officer did not hesitate, blowed his whistle firmly and directed the bus to stop in front of the place where we stood. We quickly jumped on and off we went, kindly greeted by the police officer. 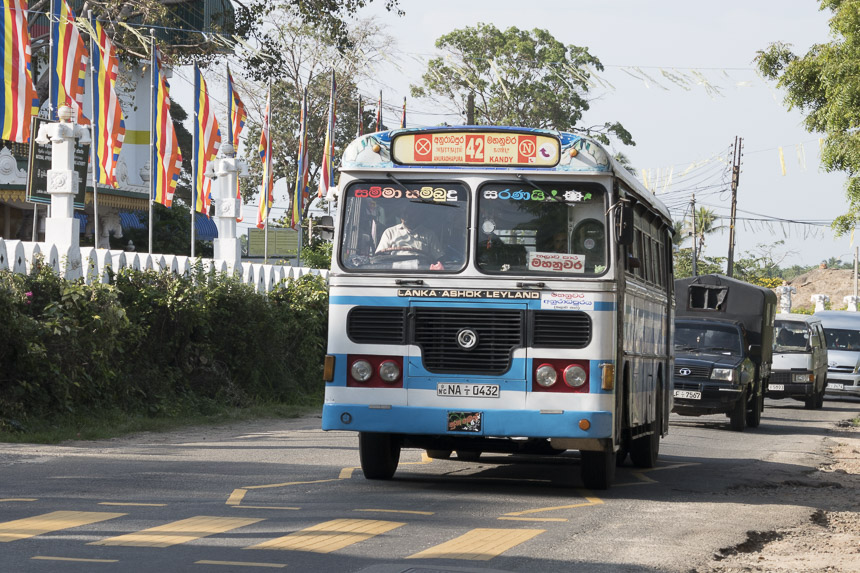 If you have time, like we do, you can just sit somewhere for a while and “observe life”. One of our favorite spots to do this, is in a local shrine. People walk in and out with small offerings and are usually dressed very well. If people see us, they sometimes start a chat and sit beside us. They want to practice their English, are just interested who we are and where we‘re from or share sometimes some fruits with us. Usually, they are proud on what they do and who they are. That is how we had many small and very nice encounters and conversations. 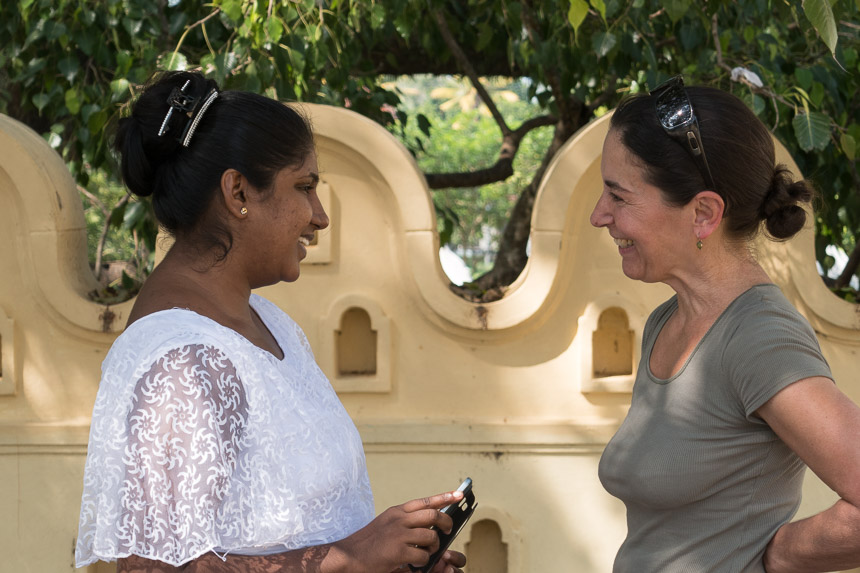 To make contact with the Sri Lankan people is so easy

Another way to meet people is to travel by bus or train. On long trips, people are usually very talkative and tell you about their lives, their family, how they make a living and so on. And they are mostly very interested in where we are from, how we like Sri Lanka and what we have seen. And they always offer help, just in case we should need it. Like here in the early morning train from Kandy to Colombo, where we had an interesting and very pleasant conversation with a family practitioner, who also gave us his business card “for just in case”. 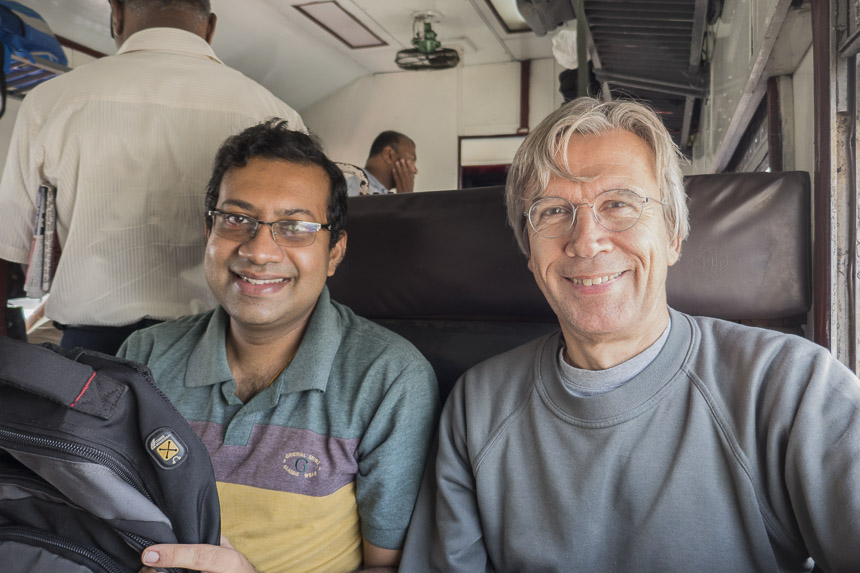 An interesting conversation on the train, it is part of this way of traveling

It doesn’t take much to establish a pleasant relationship with the Sri Lankans. Because we like to live for weeks at the same place, we also did our daily shopping in the same neighborhood for weeks. So, people started to know us as we became steady customers in their shops. But even when we were not customer in every shop, people recognized us and greeted us everywhere. It doesn’t take much but it gives you that nice feeling of being at home. 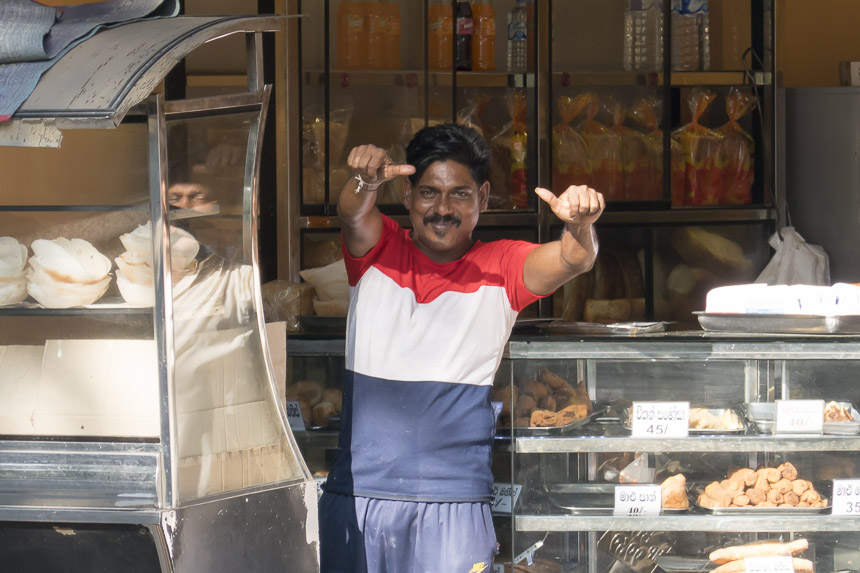 If people are more relaxed, the traffic is also more relaxed. It is at least less aggressive as in many “Western” countries, although it still can be very busy on the roads. Another thing is, that Buddhists are careful with every living creature, killing a living animal, even a small one, is actually a sin. The end result is that this dog is relaxing in the middle of a traffic intersection and is doing this, according to our own observation, at least for a few years. We can’t tell whether he spends the nights here, but during day time he assists 😉 the local police officer who is controlling the traffic. 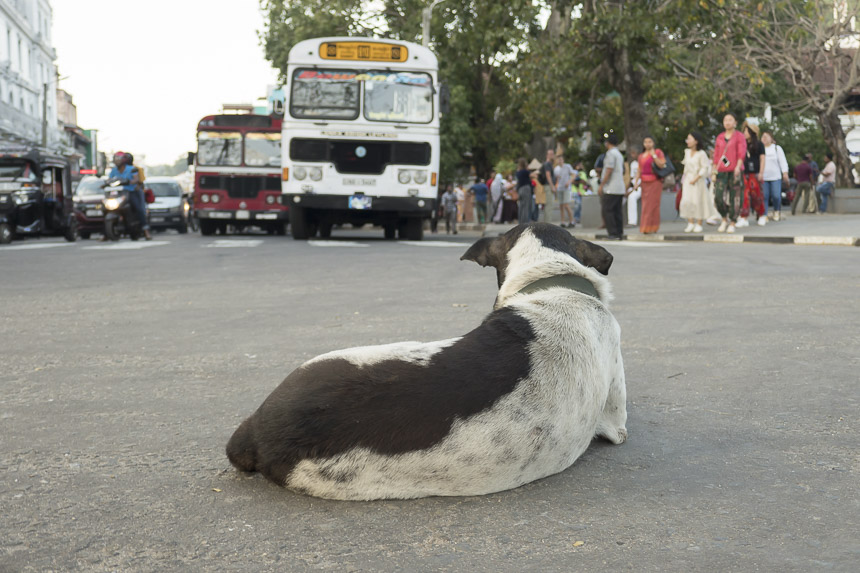 Relaxed traffic and a relaxed dog at a traffic intersection